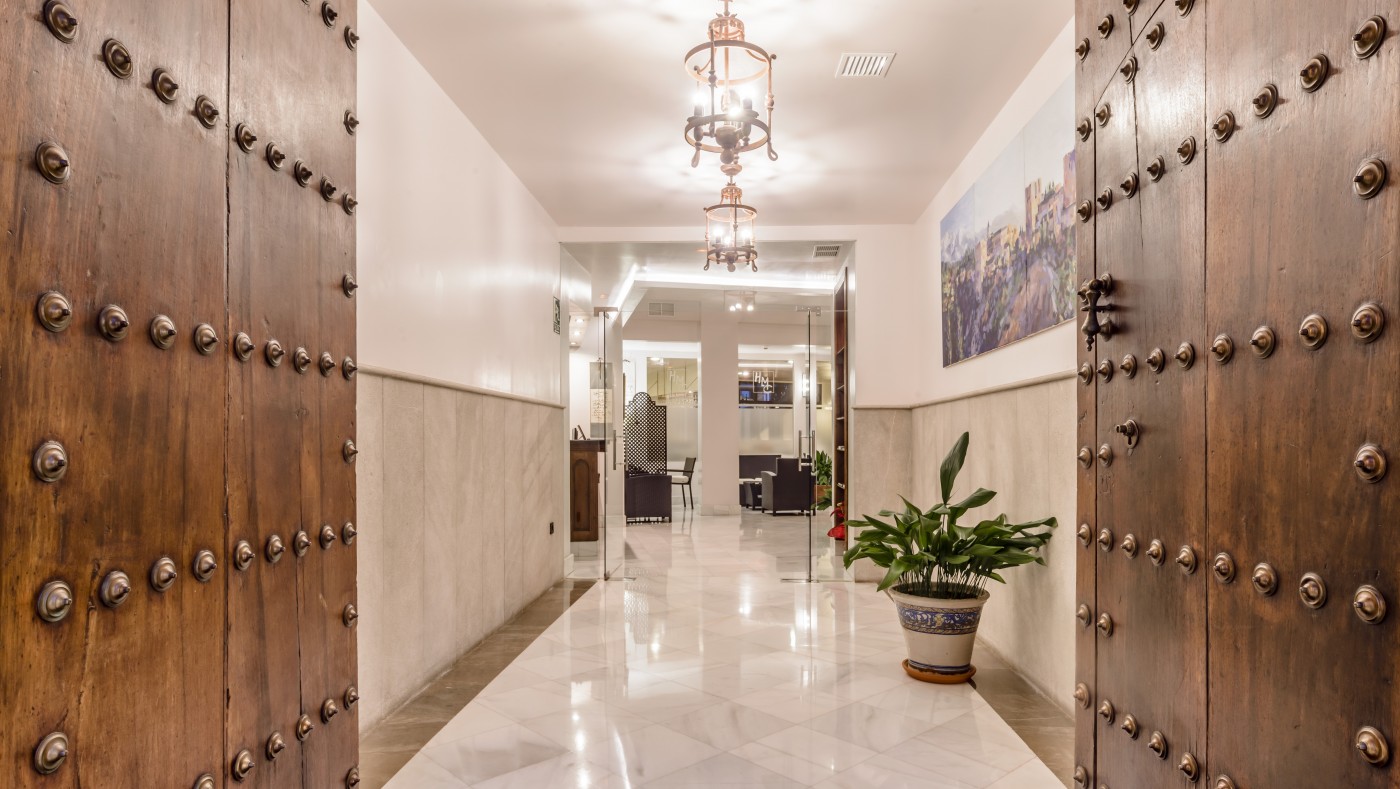 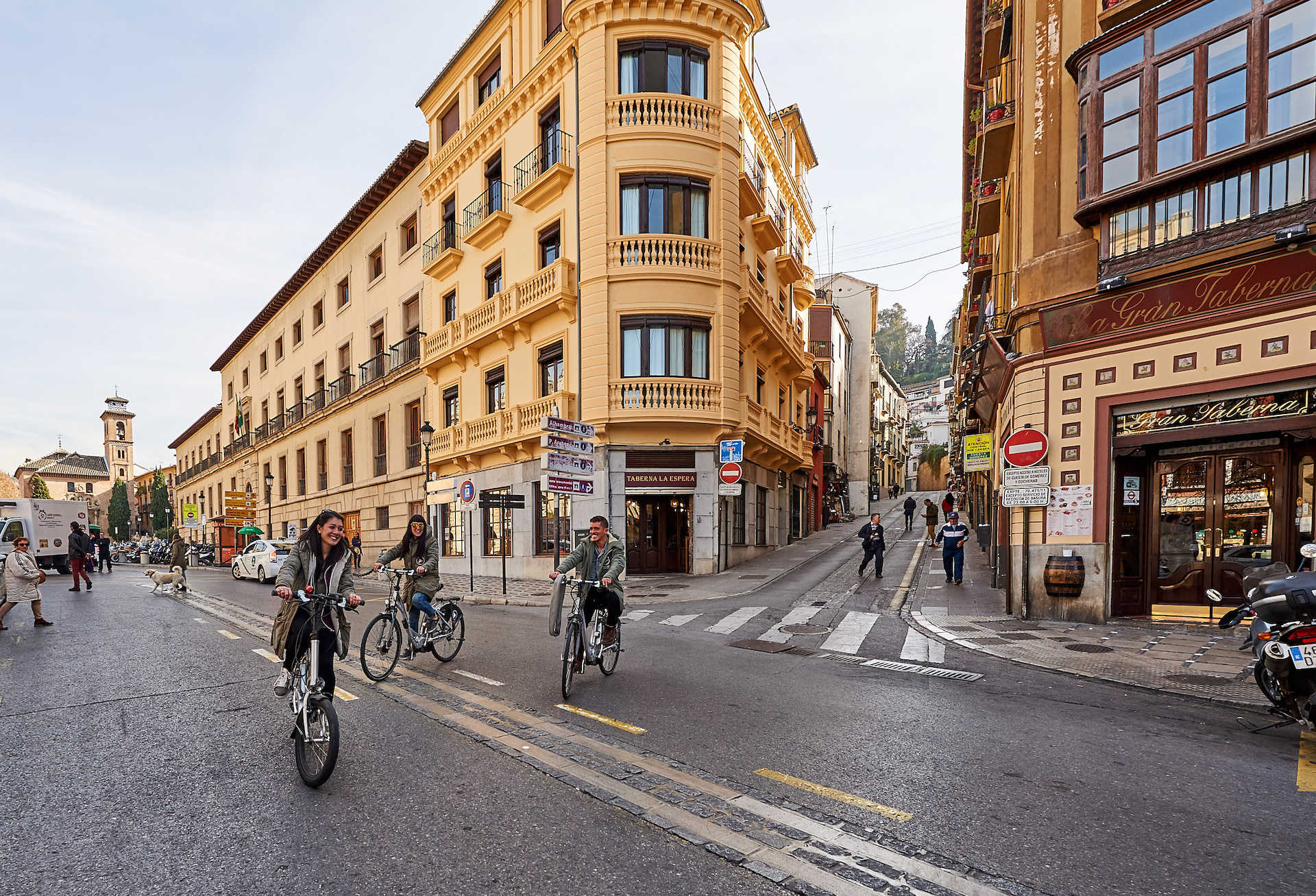 Enjoy Granada in a different way 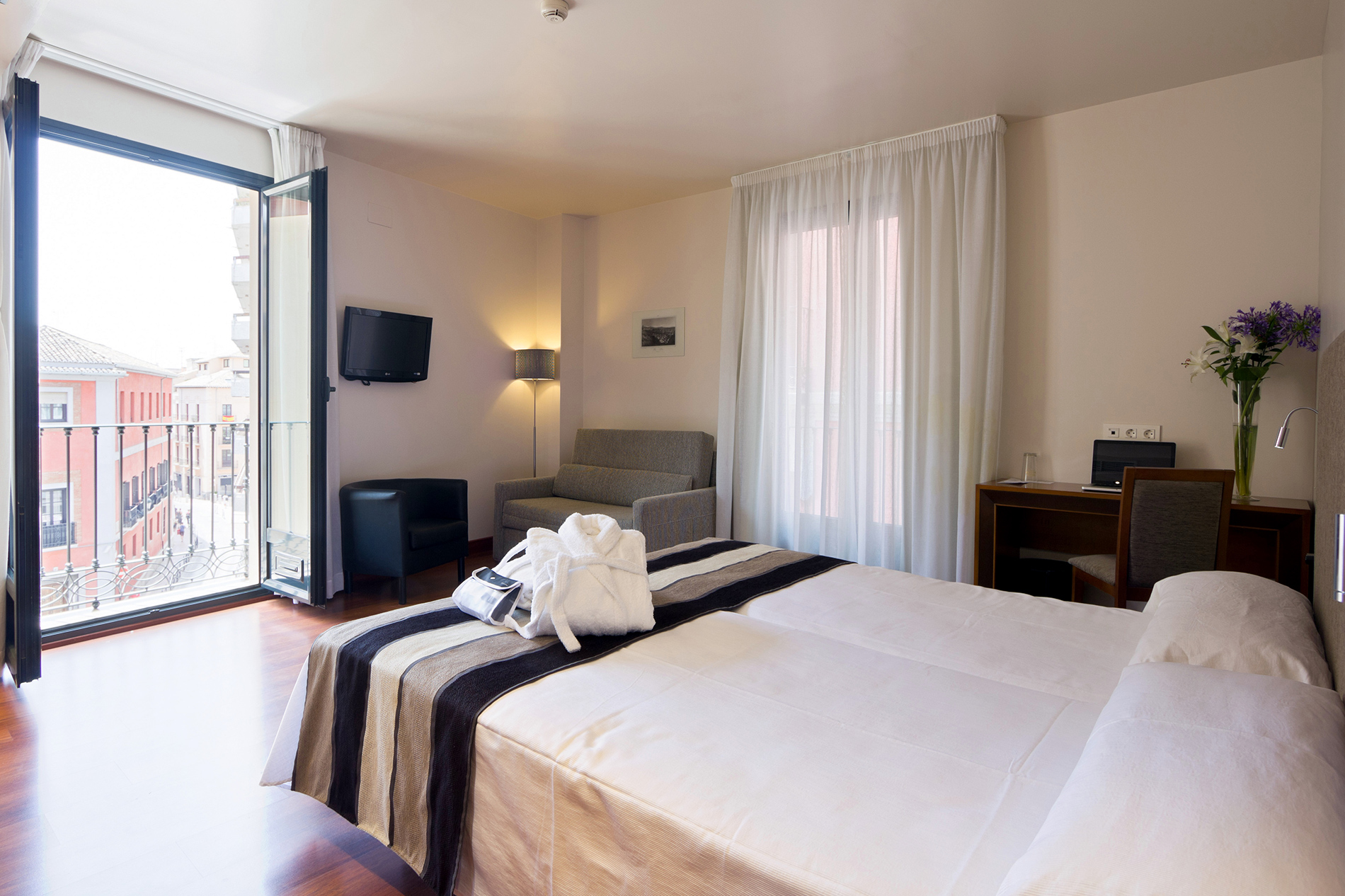 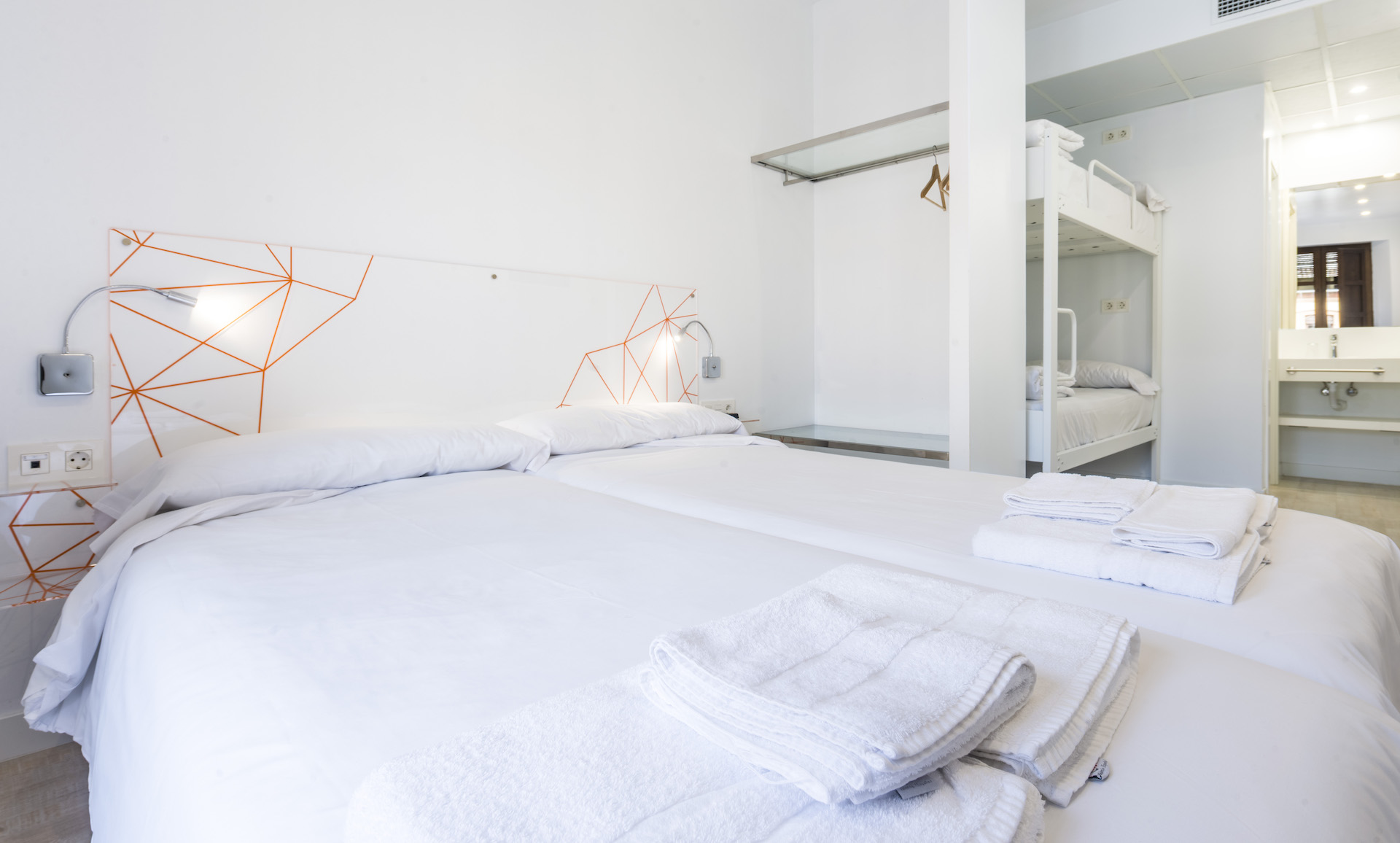 Get to know Granada with friends or family

Emblematic hotel in the heart of the city, perfect to get to know Granada.

Hostal AMC Granada is ideal to enjoy Granada with family or friends.

Our establishments have a unique location, right in the centre.

Book directly on our Official Website at the best price guaranteed.

At the end of 2015 we completed a complete refurbishment of the emblematic establishment “Pension Britz” located in Cuesta de Gomerez 1, just 50 metres from the Hotel Monjas del Carmen and thus our second establishment was born: AMC Granada.
Gomérez is a deformation of Gumara or tribe of the Gomaríes, the Berber tribes of the Peñón de la Gomera, who came to serve the sultans. This steep slope was formerly the natural course of the ravine of La Sabika, which, between the hills of the Alhambra, was to drain into the Darro, through what is now Plaza Nueva.

It offers the best qualities and wonderful views to ensure an unforgettable stay in the city of the Alhambra.
Its strategic location, in the city centre, allows you to visit all the monuments and historical areas of Granada within a 5-minute walk.
Its spaces have been consciously designed to provide maximum comfort for all types of guests, but especially for families and people with disabilities and/or reduced mobility.
AMC Granada is ideal for friends, families, couples, children or to enjoy a weekend break.
The location of our two establishments is undoubtedly the most appreciated since both are at the crossroads of the three main cultures and civilizations of Granada: the Muslim, the Jewish and the Christian, between the Albaycín, the Realejo
and the Cathedral.
Without a doubt, you have come to your home, you have come to our home. We are waiting for you.

At the Hotel Monjas del Carmen
you can enjoy a wide range of services
of services such as restaurant, meeting room,
free Wifi, 24 hour reception, parking, etc.

Hostal AMC Granada offers a wide range of services
of services such as free wifi, parking, reception, etc.
to enjoy Granada with family or friends.

The Albayzín is one of the most important landmarks of Granada’s identity. The neighbourhood is perched on a lofty hill facing the red hill of the Alhambra.
Its streets are winding, narrow and elusive; its squares are luminous, secluded and intimate; the palaces, mansions and churches are brimming with history and art.

The Cathedral of the Incarnation in Granada is another monument not to be missed. It is one of the most outstanding works of the Spanish Renaissance.
Next to the Cathedral is the Royal Chapel, famous for housing the tombs of the Catholic Monarchs.

It is one of the most magical places in the world to watch the sunset.

The views are spectacular and the atmosphere in the square is wonderful.

Annex to the Cathedral of Granada, founded as a burial chapel by the Catholic Monarchs, Isabella I of Castile and Ferdinand II of Aragon.

It houses the tombs of their daughter and heir Juana I of Castile and her husband, Felipe el Hermoso. 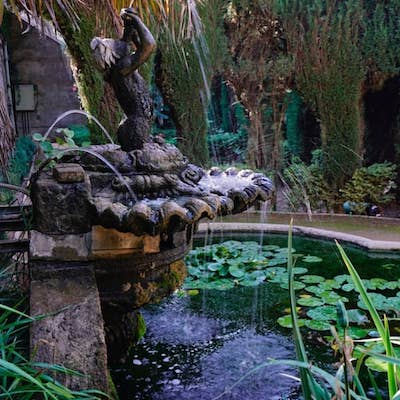 WHAT IS A CARMEN?

A lot of people who come to Granada often ask us what is a Ca... 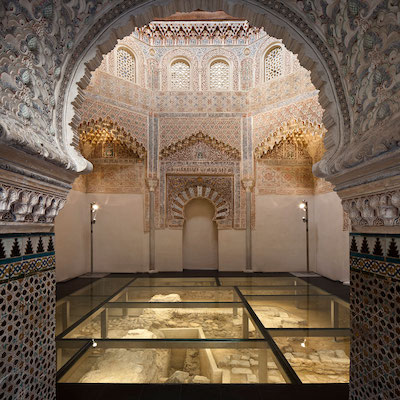 ﻿﻿   On Oficios street, very close to the Royal Chapel and the Cat... 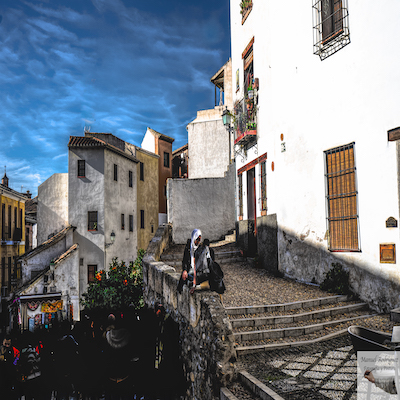 In this new chapter we will cover the origins of Granada. Wit...

GRANADA, THINGS TO DO

The Arab baths consist of three areas with pools of water at different temperatures, which give their name to the hot, warm and cold rooms. Each client can follow the route as they wish, always under the recommendations of the Hamman Granada team for a greater enjoyment of the tradition.

In the district of Sacromonte we find one of the main cradles of flamenco in Andalusia.  Flamenco shows are made up of three parts: singing, guitar playing and dancing. Jondo’ is the word that defines flamenco singing, it is done with a lot of feeling, from within, from the depths (‘jondo’). The dance is the highlight of the show, the most common is improvisation, but this requires years of practice.

A visit to Granada will never be complete if you don’t try the ‘tapeo’ in its bars and taverns, where a variety of succulent dishes are offered as a courtesy of the house with your drink, which is usually a glass of ‘Alhambra’ beer or a wine from the Denominación de Origen Granada.