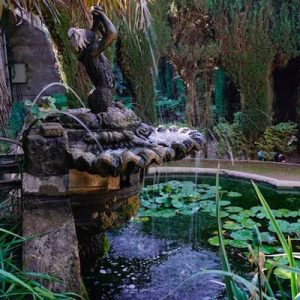 A lot of people who come to Granada often ask us what is a Carmen, why the houses in Granada are called Carmenes and what is the history behind this type of house.
Well, a Carmen is the typical house of the Albaicín and Realejo neighborhoods in Granada. Both the word Carmen and the house with its peculiar architectural characteristics have Arabic roots. Carmen comes from the Arabic word “karm” which literally means “vine.” This is not a coincidence given that all Carmenes have (or traditionally have had) a vine arbor that provides shade to the entrance of the house.
In symbolic language “karm” means “orchard”, that is really what these types of houses represent: an authentic paradise.
In a Carmen the concept of a garden and orchard are perfectly combined, in such a way that this type of house turns into a place where all scenes are alert at all times: sight and smell of flowers and trees, the taste of fruits, the soft felling of the petals and the water that escapes through your fingers, the sound of the birds that flutter up in the branches and the soft murmur of the fountains. High walls protect its interior space from gazes.
Water is a fundamental element in this house as it becomes a symbol of life. On the one hand the water is calm, contained in the pools, and on the other hand, the water is lively running through the jets.
Back in the day, the Carmenes were not like we know them nowadays. They were smaller land plots than today’s and their functionality was more like a recreational garden, although some were permanent homes.
Starting with the Christian conquest, the Albaicín neighborhood was depopulated by the successive emigration of Muslims, and the new buyers took over several of the small Muslim houses in order to combine them and build a single Carmen.
The usage as a garden orchard and as a recreation house is recognized by many authors of the time, such as Ibn al-Jatib (1313-1374) in the 14th century and the Castilian writer Luis de Mármol (1524-1600), who stated «The exits of the city towards the fertile plain (…) between Carmenes and very fresh orchards, especially through the Albaicín gate …». Years later, already in the 17th century, Henríquez de Jorquera (1594-1646) picked up the rustic character of most of the Carmenes.